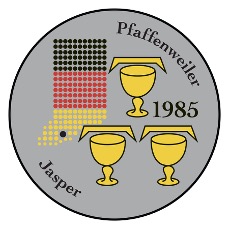 While visiting Pfaffenweiler, Germany during the bi-annual student exchange in the summer of 2019, Ross Halvorsen, German teacher at Jasper High School and member of the Sister Cities Board of Directors, made plans with sister city team members of Pfaffenweiler to hold a new logo contest in the fall of 2019. The idea was developed to link the two cities even more with the creation of a common Partnership Logo. This idea was promoted by both partnership organizations into a creative logo competition in both Pfaffenweiler and Jasper. Both cities felt it important to include participants and entries from both of the sister cities and to include a prize of $500 for the winning logo.  Web-based document sharing was used to outline the guidelines for the entries, the rules of the contest, and for participants to submit entries.

A clear winner emerged that artfully combined the Jasper and Pfaffenweiler cities, and the history of the relationship beautifully. The winning designer, Tracey Lorey of Running Design Studio in Jasper, received her award during a promotional reception and the new logo was unveiled just in time for the anniversary of the 35th year of the partnership in January of 2020.

“We are so honored and excited to win this award for Innovation in Arts & Culture from Sister Cities International. We are so very proud of our new sister cities logo and the cooperation and partnership between Jasper and Pfaffenweiler on this project. Receiving recognition of our hard work and this award for our efforts is just an additional fantastic benefit, “ stated Mary Leah Siegel, President of the Sister Cities of Jasper.

About Sister Cities of Jasper

Sister Cities of Jasper was established in 1985 creating a sister city partnership between the Village of Pfaffenweiler in the state of Baden Württemberg, Germany and the city of Jasper, Indiana USA. The partnership was formed to promote peace through mutual respect, understanding and cooperation between both communities, to promote the exchange of students and adults, and to create people to people connections. To date, the sister Cities of Jasper have sponsored eighteen student group exchanges, several adult anniversary trips, and countless personal exchanges between the people Jasper and Pfaffenweiler. The sister city partnership between Jasper and Pfaffenweiler celebrates their 35th Anniversary this year in 2020.

Sister Cities International (SCI) is an American nonprofit founded by President Dwight D. Eisenhower 63 years ago to be a champion for peace and prosperity by fostering bonds among people around the world. People-to-people “citizen diplomacy” enhances the ability of people from different cultures to understand, appreciate, and celebrate their differences while building partnerships that advance the interests of all humankind. The SCI vision is to enhance our stature as the largest, premier global network connecting people and communities from all backgrounds within the United States, and around the world. SCI seeks to find common ground, and to promote values of peace, understanding, and democracy.