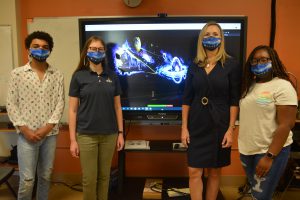 HOT SPRINGS – As a gesture of support and encouragement during this worldwide pandemic, Hanamaki, Japan, sent its Sister City, Hot Springs, a set of 100 custom hand-made ¬¬facemasks with a design and text inspired by Hanamaki’s Miyazawa Kenji, world-renowned poet and author.

The gift came from the Hanamaki City Office of International Relations, and included a pamphlet describing the purpose and meaning of the facemasks, as well as details about how they were carefully produced.

As described in the pamphlet, Hanamaki was going to serve as a host town for the 2020 Olympics, which were postponed due to the pandemic. Coming with the honor and responsibility of serving as a host town would have been funding from the Japanese national government.

“Hanamaki first signed up to be an Olympic host town in its desire to express gratitude for the outpouring of emotional and financial support it received from the people of its sister cities during the Great East Japan Earthquake in 2011. And it was with that same sentiment that the Hanamaki Office of International Relations decided that the right way to use the allocated funds from the government, as well as that of its own fiscal budget, would be in a way that could help those sister cities,” wrote the Office of International Relations in the pamphlet.

Visit Hot Springs’ Cultural Affairs Manager and Sister City Program Director Mary Zunick delivered the facemasks to students who were originally scheduled to travel to Hanamaki in June. They will hopefully get to take their trip in 2021, said Zunick. She also shared the facemasks with the City of Hot Springs Board of Directors and students enrolled in the Japanese language and culture course at the Arkansas School for Mathematics, Sciences and the Arts.
As was mentioned in the pamphlet from Hanamaki, Zunick recounts the times that the Sister City program has facilitated support through tragic and challenging events. After Hurricane Katrina, when many impacted individuals and families evacuated to Hot Springs, “friends in Hanamaki sent contributions to help us help them,” said Zunick. After the 2011 earthquake and tsunami, Zunick said many “watched helplessly here in Hot Springs as those in Hanamaki lost friends and loved ones along the coastal area of Japan.” More than $25,000 from the Hot Springs area was collected and sent to assist those who had evacuated to Hanamaki.

“Again, during this unprecedented time of crisis, sister cities watch from afar as the pandemic impacts our cities. Hanamaki has not suffered as much from the direct loss due to the illness, so they have found a way to lend support to us here in Hot Springs,” explained Zunick. “The masks can not only protect us physically from the illness, but can also encourage us through the words of Miyazawa Kenji to remain strong in spite of hardship.”

Kenji was born in Hanamaki in 1896, and is renowned throughout Japan and abroad as a poet and author. There was a silhouette statue of Kenji erected in Hot Springs near the Convention Center during the 20th anniversary of the two cities’ friendship. Two of his most well-known works are Night on the Milky Way Express and Strong in the Rain, “both of which were used as inspiration in the design of these masks,” said the pamphlet.

He wrote Strong in the Rain in a small notebook that he kept near his bed in his final days before he passed away at the age of 37. Although he did not write the words with intent for them to be shared, “the poem would go on to become one of the most impactful of his works as it continues to stir courage and compassion in people around Japan to this day,” said the pamphlet.

“While these masks may not be much, they are certainly sent with love as we strive to keep alive Kenji’s dream of being strong in the rain. The sincerity and meaning behind this famed poem has helped us through many hardships, and this time, we’d like to share it with you,” said the Hanamaki City Office of International Relations.

Koyata fabrics and dyeing company “carefully made every mask included in this set, one by one, by their small team of dedicated experts – with no outsourcing or corner-cutting involved,” the pamphlet stated.
Koyata’s Senior Managing Director Yoko Kosegawa shared a message: “We know that our friends overseas have been doing their best fighting the pandemic, as we have done as well. Personally, I have many wonderful memories with people from our sister cities, and especially from Hot Springs, Arkansas. Over the years, I received warm hospitality, and spent much quality time with my ‘second family’ that I will never forget, and for that I am sincerely grateful. On behalf of all of us, it is our honor to be able to participate in this initiative, and we hope that these masks help keep our friends looking forward.”

Cutline: From the left, ASMSA student Courtland Callis, ASMSA Japanese instructor Elizabeth Brown, Honorary Consul of Japan for Arkansas/Sister City Program Director Mary Zunick and ASMSA student Talana Small wear a mask created by the city of Hanamaki, Iwate, Japan’s Office of International Relations. Hanamaki is a Sister City with Hot Springs. The masks were sent as a sign of goodwill and support for Hot Springs during the COVID-19 pandemic.