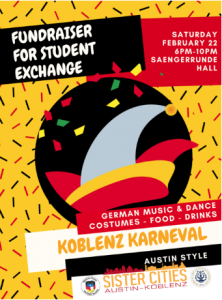 In Austin’s sister city of Koblenz, Germany in the heart of the Rhineland, Karneval is recognized as the “Fifth Season” of the year. Karneval Season begins in November and continues until Lent begins; however, during the final week, known as “the crazy days,” Koblenz/ along with the other towns in the Rhineland, is a place of non-stop revelry with street festivals, parades, costume balls, and parties. Among all the traditions and rituals associated with Karneval, costumes play a very important role. Many people plan all year to come up with just the right costume.

What to expect at Koblenz Karneval-Austin Style:

Our MC’s, Jim Walters and Evan Woodruff (fathers of elementary exchange students) have an entertaining evening planned out and some sweet surprises up their sleeves:

Want your event to appear in our calendar? Send us your program event details.