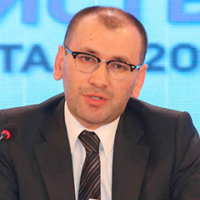 His Excellency Javlon Vakhabov, Ambassador of Uzbekistan to the United States

Javlon Vakhabov is a young diplomat who hopes to emphasize his country’s alleged turn towards openness and reform after the death in September 2016 of dictator Islam Karimov, who had ruled the country with an iron fist for 17 years. Vakhabov presented his credentials to the State Department on October 18, 2017, and to President Donald Trump at the White House on November 29.

Born August 7, 1980, in Tashkent, then the capital of the Uzbek Soviet Socialist Republic, Javlon Abdujalolovich Vakhabov earned an undergraduate degree at the University of World Economy and Diplomacy in Tashkent in 2001, and an M.A. in International Law at the same institution in 2003.

Vakhabov joined the Uzbek Ministry of Foreign Affairs in 2001, serving early career assignments as an attaché, 3rd secretary, and chief of division.

In 2006, President Islam Karimov appointed Vakhabov to the Uzbek National Security Council, serving as leading consultant and as head consultant until 2011, when he was promoted to deputy secretary of the Council.

For most of 2013, Vakhabov served as director of the Institute for Strategic and Inter-Regional Research, a government-funded think tank in Tashkent.

Javlon Vakhabov speaks English and Spanish, and is married with two children.

Ambassador Vakhabov will be speaking at the Silk Road and Central Asia:Developments in Uzbekistan panel on Thursday, August 2 at 2:00 pm.