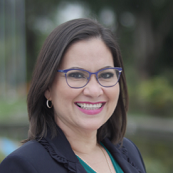 Mechanical Engineer graduated from ESPOL, with a Master’s Degree and a Doctorate in Sciences and Engineering of Materials from Rutgers University. Professor-Researcher of ESPOL since 2001. She has been a member of the Research Council, Associate Dean of the College of Mechanical Engineering and Production Sciences, Director of the Center for Research and Development of Nanotechnology, and Director of the Materials Testing Laboratory.

She was President of the Provisional Council of Higher Education, CES, from November 2010 to September 2011. She has run projects of research, development, and implementation of laboratories with other institutions, like MIPRO in Ecuador, and international universities like the Catholic University of Leuven (Belgium), among others.

Internationally, President Paredes has presided the Latin-American and Caribbean Consortium of Engineering Institutions (LACCEI). She has received the recognition as a distinguished graduate from Rutgers University and has been part of international forums on Higher Education, such as those sponsored by Universia and the Rockefeller Foundation.