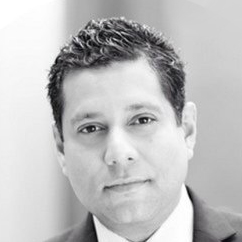 His Excellency Dr. Neil Parsan assumed the position of Ambassador Extraordinary and Plenipotentiary to the United States of America, non-resident Ambassador to the United Mexican States, and Permanent Representative of Trinidad and Tobago to the Organization of American States (OAS) in February, 2011. He also held the Cabinet position of Executive Secretary for Integral Development at the Organization of American States (OAS) as confirmed by 34 countries through the Inter-American Council for Integral Development (CIDI) in September, 2015.

Dr. Parsan earned his Undergraduate Medical Degree at the University of the West Indies, Faculty of Medical Sciences, where he graduated with Distinction. After spending eight (8) years as a Lecturer/Tutor at the Faculty of Medical Sciences (UWI), he pursued a Master of Business Administration (MBA), where he graduated as Top Student with Distinction. He also holds a Registered Financial Consultant (RFC) Degree, a CACM from Harvard University School of Public Health, and a World Trade Professional Degree from ITM Worldwide in Sweden. Dr. Parsan was also awarded an Honorary Doctorate for Education, Culture, and Humanitarian work from the Americana University, registered with Cambridge University (UK) and the Congress of Mexico.

Ambassador Parsan is presently Special Advisor to The World Bank Group, Co-Founder and Managing Director of Parsan Cross, a Global Strategic Advisory firm located in Washington DC. Dr. Parsan is Chairman of the Board of Directors for the Global Alliance for Surgical, Obstetric, Trauma, and Anesthetic Care (The G4 Alliance) based in Chicago; Chairman of the Global Gas Council; Chairman of the International Gas Union (IGU) Global Ambassadors Network and a Director of the Young Americas Business Trust (YABT) and the Arthur Lok Jack Graduate School of Business (GSB) Alumni Board. He is a Director on the Board of Ben’s Chili Bowl, a historic landmark restaurant chain in Washington DC. He previously served as Chair of the Inter-American Council for Integral Development (CIDI) and Chair of the Permanent Council of the Organization of American States. He was also the Chief Executive Officer of HealthNet Limited.

Dr. Parsan has also been given the following recognition: Conferred the title of Colonel Honorable Neil Parsan by the Governor of the Commonwealth of Kentucky, U.S.A.; Award for Leadership by the City of Philadelphia and the Africa and Caribbean Business Council; Proclamation of Ambassador Dr. Neil Parsan Day in the Cities of Boston, Hartford, Doral, and Miami; Statesman Award from Memorial of Congressman Payne; and the key to the City of Broward County, Florida.

His Excellency is an Honorary Member of the International Committee on HIV/AIDS on Capitol Hill, the Women’s Foreign Policy Group, the American Association of People with Disabilities, and the Americas Society. Ambassador Parsan is also on the Board of Advisors of the National Student Leadership Foundation of the USA.

He was a Director at several Companies and has consulted on several special projects locally and internationally.

Dr. Neil Parsan is the 2018 Annual Conference keynote speaker on Saturday, August 4th at 11:30 am.