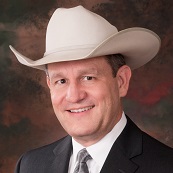 Joel Cowley serves as the president and chief executive officer of the Houston Livestock Show and Rodeo™, where he is responsible for the efforts of more than 35,000 volunteers and 120 full-time staff in conducting a 23-day event that draws more than 34,000 livestock show entries and an annual attendance of more than 2.5 million, 1.3 million of which enter NRG stadium to enjoy the rodeo and concerts.Cowley has been active on a number of boards, including the Greater Houston Convention and Visitors Bureau, the Texas 4-H Foundation, the Texas FFA Foundation, the University of Houston Bauer College of Business, and the Super Bowl LI Community Council. He was named the 2017 Executive Communicator of the Year by the Houston Chapter of the International Association of Business Communicators and received the Outstanding Alumni Award from the Texas A&M University Department of Animal Science in 2019.