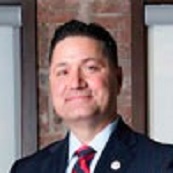 Dr. Juan Sánchez Muñoz was appointed as University of Houston Downtown’s sixth president in February 2017. In a short time, he has helped expand the institution’s reputation in the city of Houston and throughout the state. Thanks to a revised strategic plan and campus visits from legislators, civic leaders and city officials, UHD has gained visibility as a University that is affordable, accessible and achievable. Dr. Muñoz earned a Bachelor of Arts in Psychology from the University of California, Santa Barbara. After returning from military service in the U.S. Marine Corps during the 1990-91 Gulf Crisis, he attended California State University, Los Angeles, where he earned a Master of Arts degree in Mexican-American Studies with an emphasis in literature. He completed his Doctorate of Philosophy at the University of California, Los Angeles, where he studied Curriculum & Instruction in the Division of Urban Schooling.