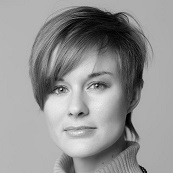 Ksenia is an urban researcher and planner, Fulbright Fellow, and MIT graduate, whose professional experience includes more than 10 years of work in the capitals and hinterland of Russia, the USA, Germany and India with leading international organizations and NGOs, educational and research institutes, and municipalities.

In 2007-2010 Ksenia worked at the World Bank and co-authored a major study on the energy efficiency potential in Russia, which marked the beginning of fundamental federal policy shifts in Russia. As part of a joint UN-Habitat and ICLEI project “Urban Low Emissions Development Strategies”, in 2013-2014 Ksenia assisted rapidly growing cities of South Africa, Brazil, Indonesia and India in implementing best low-carbon urban planning practices. In 2014-2017, she founded and led the Center for Urban Studies of the Moscow School of Management SKOLKOVO. In 2017-2018, she became an adviser to the mayor of Yuzhno-Sakhalinsk on urban development supervising, among other things, corporate-municipal relations with foreign resident companies, such as Exxon, Schlumberger, and Shell. Since 2017, Ksenia has been working on City Compass, her mentorship project in which she summarizes and passes this experience on to new generations of urban planners in Russia.

Ksenia authored a number of books and numerous articles, as well as master’s degree and professional certificate courses in urban planning in leading educational institutes of Russia. She recently moved to Houston with her husband and two dogs.