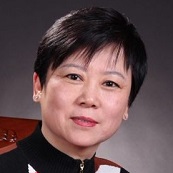 She joined the CPAFFC in 1975 after graduating from the English Department of the Foreign Languages College, Wu Han University. She successively held the posts of the Director of the American Division, Deputy Director-General, the Director-General of the Department of the American and Oceania Affairs and the Vice-president of the CPAFFC. From 1990 to 1992, she served as the First Secretary in the Chinese Embassy in the United States. In 2003, she was elected member of the National Committee of the Chinese People’s Political Consultative Conference (CPPCC). She became the President of the CPAFFC in September 2011. In 2013, she was elected member of the Standing Committee, and Deputy Director General of the Foreign Affairs Committee under the National Committee of the CPPCC.

From 1982 to 1983, she studied in the University of California, Los Angeles, and obtained the master degree in the major of the history of Asian American studies.