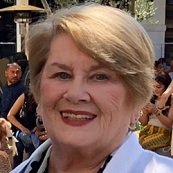 Pat Fallin, State Representative SoCal, has been active with Sister Cities since 1987. Her interest began as a member of the Aspen, CO City Council as they began to form their Sister Cities program.  She became active in the program serving as Vice President of Aspen Sister Cities Committee and began attending Sister Cities International Conferences. In 2000 she was appointed State Coordinator for Colorado and in 2003 she was elected to the SCI Board of Directors where she served two terms. She is a member of the SCI Honorary Board and serves on the Membership, Finance and Strategy/Programs Committees. Since 2012 Pat has served as a State Representative-SoCal. Pat has many years of experience in fundraising, organizational development and non-profit governance.