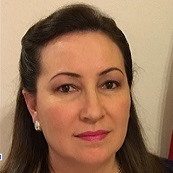 Ruth María Dueñas de García is Ambassador of the Ecuadorian Foreign Service Career, to which she belongs since 1986.

She has a degree in Legal Sciences from the Pontifica Universidad Catolica del Ecuador (1983-1988), she made the Third Diplomatic Course at the Diplomatic Academy of Ecuador (1990-1992). In the Ministry of Foreign Affairs in Quito, she worked in the areas of National Sovereignty and Borders with Columbia and Peru, in the Legal Department and in the Summit and Foreign Policy Coordination. Between 1999 and 2002, she served as Chief of Staff of the Office of the Undersecretary of National Sovereignty and in 2007 she was Chief of Staff of the Vice Minister of Foreign Affairs. Between 2009 and 2012, she served as Director General of Bilateral Relations with Latin America and the Caribbean. Between January and November 2014, she was adviser to the Vice Minister of Foreign Affairs and Political Integration.

She has served in her country in the Embassy of Ecuador to Belgium, Luxembourg and the European Communities between 1994 and 1998, and in the Embassy of Ecuador in Canada, between 2002 and 2006. She assumed as Consul General of Ecuador in Houston in December 2014. In addition, she served as Secretary of the Honorable Foreign Relations Advisory Board during two periods of Government and has been delegated by the Ministry of Foreign Affairs to several national and international meetings.

She received the Decoration of the Order of Merit of Chile in the degree of Grand Officer and the Medal of Recognition of the Prince of Asturias.

She speaks two foreign languages, English and French, as well as Spanish, which is her mother tongue.