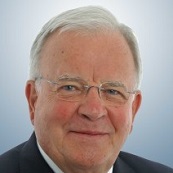 Wolfgang Schmidt born 1935, graduate of engineering in Germany, MBA in the United States. Industrial career with senior management positions in pipe mills in Germany and the United States. Part owner of a company in Saxony Anhalt that was privatized after reunification. Managing director of a family business. Holder of the Cross of Merit of the Federal Republic of Germany, Honorary Citizen of Texas, Needle of Honor from the City of Leipzig. Founding President of the Houston-Leipzig Sister City Association.