The motto, “One individual, one community at a time” is a critical piece to the Sister Cities mission. It reminds Sister Cities volunteers and community members striving to connect with the distant peoples of their Sister Cities, that the cooperation ignited by Sister Cities organizations is only as successful as the quality of the relationships the work inspires. This story from Sister Cities Bolder-Lhasa is exceptional in its ambition to help a young girl named Lhungtse suffering from an illness which required brain surgery. But what makes it such a perfect example of a Sister Cities initiative are the relationships that were bonded through the good work. As Lhungtse simply puts it, “I like being with people who helped save my life five years ago”. 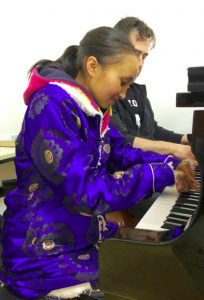 In 2013 BLSCP raised $19,000 to fund brain surgery for Lhungtse, whose eyesight was destroyed at age 11 by neurocysticercosis. The brain surgery did not restore any of Lhungtse’s eyesight but did relieve many of her other symptoms. For the past five years, BLSCP has funded her expenses for medical checkups and anti-epileptic medicines.

Boulder-Lhasa Sister Cities Project (BLSCP) members Bill Warnock and Shari Mayer were joined by Aaron Miller (Bill’s nephew) on a trip to Chengdu and Kham to spend nine days with Lhungtse and her mother. Bill, Shari, and Aaron used their own funds to pay for travel costs. After we learned in 2017 that Lhungtse loves the piano, Bill invited Aaron to join us on this trip and offer keyboard lessons to Lhungtse. Aaron is a full-time keyboard instructor in Bend, Oregon. He accepted the invitation and organized his own fundraising campaign at GoFundMe to cover costs associated with the lessons.

Our excellent tour guide, driver, and interpreter/translator was again Tenpa Tenzin. On October 22 our tour provided by Conscious Journeys began with dinner at Bollywood Restaurant, an excellent Indian restaurant. On October 23 Tenpa took Aaron, Shari, and Bill for a visit to Chengdu Panda Base. On that evening Dr. Li Tiaoying, BLSCP’s long-time partner at Sichuan CDC, hosted all of us for a wonderful dinner at Hefeng Japanese Fish Restaurant. On October 24 we took Lhungtse to Sichuan Provincial People’s Hospital for her annual checkup by Dr. Zeng Xian Rong, Lhungtse’s neurologist. Lhungtse’s mother had been experiencing some headaches, pain around her lower ribs, and numbness in a little finger. Dr. Zeng kindly accepted my request for her to examine Lhungtse’s mother also. Dr. Zeng ordered blood tests and a CT brain scan for Lhungtse and several tests for her mother.

On October 25 there was time for Aaron to offer his first lesson to Lhungtse, on a grand piano that I had located in September near Sichuan Music University. While Lhungtse played notes that she liked, Aaron performed some complementary melodies by her side. She absolutely loved the lesson! After the lesson ended, as we were walking to a nearby piano store, Lhungtse was happier than I have ever seen her. She kissed Aaron’s hand three or four times. Whenever Lhungtse walks she always slides her feet to avoid tripping over anything. However, aa she was walking with her mother holding one hand and Aaron holding the other, I saw her take a hop out of pure joy!

During mid-day on October 26 I met with Dr. Li for 90 minutes to continue developing two ideas for further collaboration with BLSCP during 2019 on fighting neurocysticercosis. In the early afternoon we met again with Dr. Zeng. We then learned that Lhungtse’s CT brain scan showed no changes. Lhungtse’s blood tests and all of her mother’s tests were normal. Dr. Zeng said that Lhungtse should continue taking Aaron Miller teaching piano to Lhungtse the same doses of her two anti-epileptic medicines and return after one year for another checkup if no new medical issues arise. Thanks to 10 compassionate donors, we raised $1,188.00 for Lhungtse’s Medical Expenses, which is 99% of our goal. The total cost for Lhungtse’s tests and medicines for the coming year was only $690.01. We will hold the surplus of $497.99 to be used toward her future medical expenses.

During the early evening of October 26 we drove to Kangding. During the afternoon of October 27 Aaron offered another lesson to Lhungtse, using a new Yamaha electronic keyboard that he had purchased for her in Chengdu. 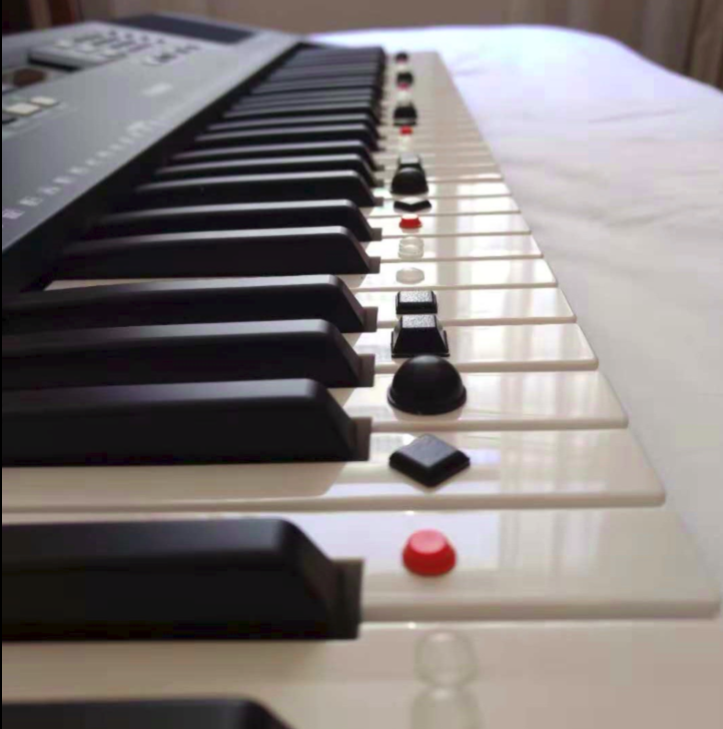 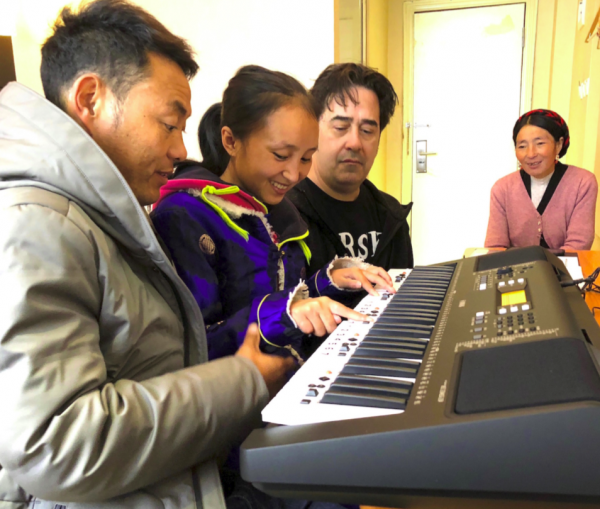 Because neither Lhungtse’s local Tibetan dialect nor Mandarin Chinese uses Roman letters, Aaron is using a number system for the notes of each octave. My understanding is that notes 1, 2, 3, 4, 5, 6, 7 correspond to the notes C, D, E, F, G, A, B. Aaron placed “bumpy stickers” on the keys so that Lhungtse can sense the notes by touch. For example, I understand that the round orange bumpy sticker designates the note E. For sighted persons, such as Lhungtse’s mother and Lhungtse’s piano teacher at Yajiang Middle School, Aaron also placed number stickers on the keys. Lhungtse thoroughly enjoys her new keyboard and was always eager to receive Aaron’s instruction whenever there was time available in our travel itinerary. Lhungtse’s new Yamaha electronic keyboard with bumpy stickers for sensing the notes by touch Tenpa interpreting Aaron’s instruction from English into Lhungtse’s local Tibetan dialect, with Lhungtse’s mother observing.

On the evening of October 27 our generous friend Bala hosted us for a delicious Tibetan dinner at Malaya Restaurant. Bala is a co-owner of Malaya and owner of Bala Fashions, with an elegant shop in Kangding offering Tibetan-style clothing for men and women. 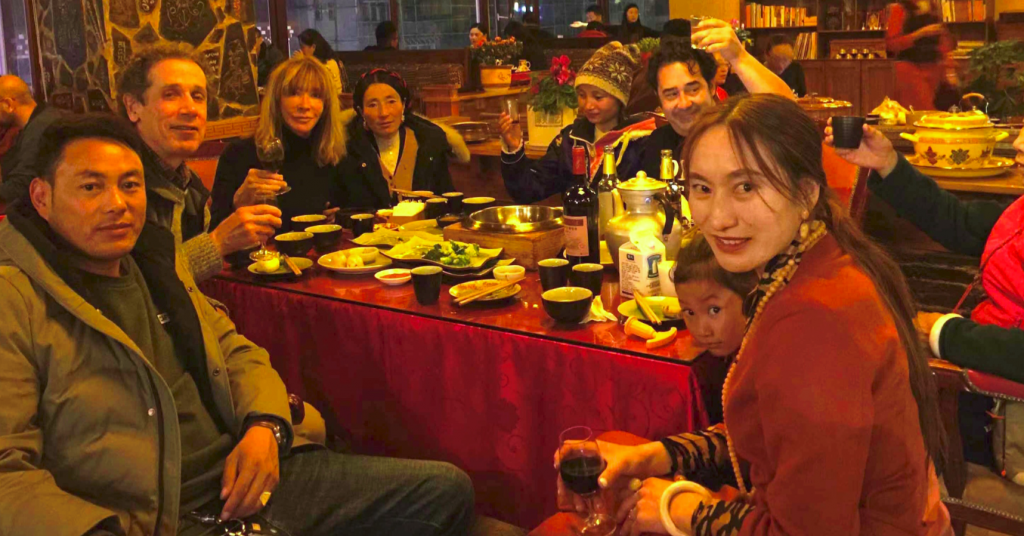 On October 28 we drove northwest of Kangding to Tagong. This was Aaron’s first time on the Tibetan Plateau, where he saw high mountains and grazing yaks and met some local Tibetans. We spent two nights at Angela Lankford’s Khampa Nomad Arts Center and Ecolodge, located
near Tagong. The beds were cozy, the food was delicious, and the conversation was engaging.

On October 30 Tenpa drove us to Lhungtse’s home in Yajiang. Since we were returning Lhungtse & her mother to their home after being away for nine days, I asked Lhungtse what she had missed the most, such as her own bed or her mother’s cooking. Instead of answering my question, she said:

“I like being with people who helped save my life five years ago.”

Her mother and Tenpa prepared for us a delicious lunch of vegetarian momos, scrambled eggs & tomatoes, braised broccoli, and sweet tea. Aaron provided some more keyboard instruction. He had texted a simply melody of 321321 to Lhungtse’s mother, so Aaron and Tenpa discussed with Lhungtse’s mother the best way to help Lhungtse play this melody and others that Aaron will be texting. 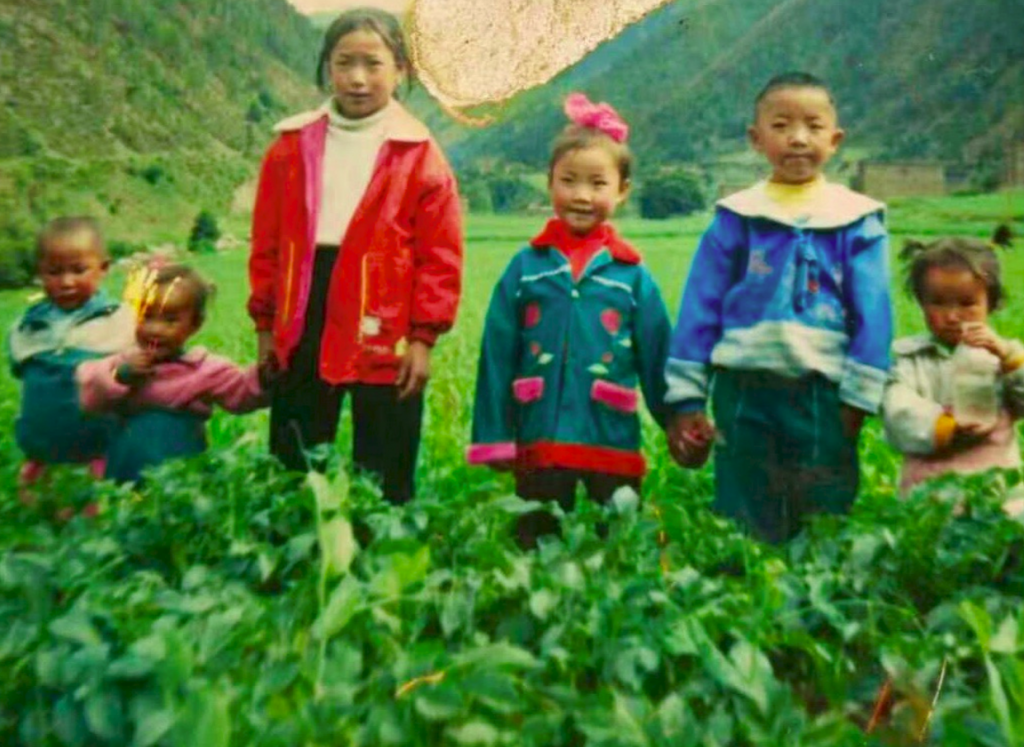