Even a fleeting international exchange can challenge perceptions, break down stereotypes, and build mutual respect for other cultures and customs. However, often the intercultural friendships fostered by Sister Cities programming are ones that last – even across generations.

US and German participants in the Norfolk-Wilhelmshaven youth exchange visit the office of US Senator Tim Kane (VA, D) in Washington, DC

The youth exchange between sister cities of Norfolk, Virginia, USA and Wilhelmshaven, Germany is a testament to this continued impact. Since 1978, the Norfolk Sister Cities Association has administered the summer program that sends roughly 10 Norfolk high school students to Wilhelmshaven one year and 16-18 Wilhelmshaven students to Norfolk the next. In the past, German parents would also travel to Norfolk for one week at the conclusion of the summer.

Jennifer Priest of the Norfolk Sister City Association and her family have personally been impacted by the lasting German-American ties formed through this program. “My daughter participated in the 2001-02 exchange. We are still close with those German ‘kids’ who are now 30-somethings with their own families. They still come to us for holidays. Because of the age of our program, we have had second generation participants.”

One remaining challenge is to recruit more Americans for the program due to an ongoing struggle to teach German in Norfolk Public Schools, despite the impact of exchanges showcasing the value of learning the German language. Nevertheless, the Norfolk Sister City Association has still been able to expand its program offerings through the Young Global Citizen Program, which launched in 2015. The program provides German students and adults with the experience of delivering a two-hour program to Norfolk Public School summer school students. The program aims to “assist in educating and exposing future leaders about the world” (view the program flyer here). 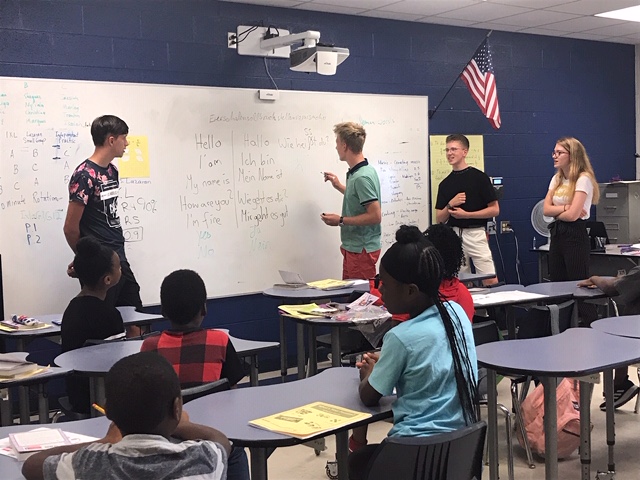 As the Norfolk Sister City Association works to expand the breadth of its programs, the depth is unmistakable. The intercultural friendships and family ties both sparked and sustained by these youth exchange programs add up to facilitate mutual respect, understanding, and cooperation between Norfolk and Wilhelmshaven, and ultimately between the US and Germany.

No Replies to "Wunderbar Together: A Norfolk-Wilhelmshaven Exchange Transcending Generations"