Wunderbar Together: A Waterloo-Porta Westfalica Connection Formed in Heritage and Music, Sustained in Exchange 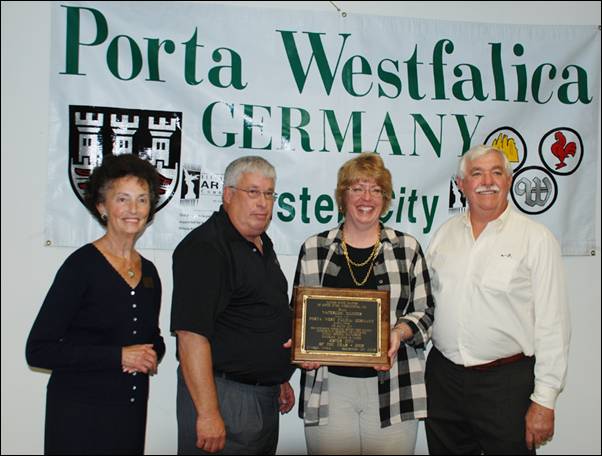 Presentation of the 2008 Illinois Sister City of the Year Award

With its official biennial visits, summer student exchanges, scholarships, and a 5,000-strong “Portafest,” Waterloo’s ever-growing portfolio of programs with its sister city of Porta Westfalica, Germany has netted it “Illinois Sister City of the Year” awards in 2008 and 2017. Given the diversity of its programs now sustaining US-German ties for 38 years, it is surprising to think back to the Sister Cities of Porta Loo’s origins simply in shared heritage and music diplomacy.

The City of Waterloo’s Ms. Vera Kohlmeier had been drawn to Porta Westfalica by genealogical research, finding that roughly two thirds of Monroe County could claim heritage from this part of northern Germany. Already joined through shared heritage, Waterloo and Porta Westfalica finalized their partnership in 1981. In the early years, partnership between the cities primarily grew through music. The first exchange occurred in July 1981 when the famous German Blaserkreis youth band visited Waterloo, only for the Waterloo German Band to return the favor in 1982. The exchanges continued to grow with help from locals, as host families in each city volunteered to host each delegation. The lasting friendships ultimately enabled the program to grow into a biennial exchange that continues to this day.

2019 Waterloo youth exchange participants on a river cruise in Germany

These biennial visits, as well as the lasting ties they have created, remain a cornerstone of the Waterloo-Porta Westfalica partnership. However, these are now just one of many programs offered by Sister Cities of Portaloo. The current focus of the partnership is the summer youth exchange. Since 1984, Waterloo and Porta Westfalica students have spent 4-6 weeks in each other’s cities, hosted by local families who often become the next year’s students. Since 2018, the annual Vera Kohlmeier Memorial Scholarship has also been awarded to a graduating senior. Sister Cities of Porta Loo has also shared its German-American partnership with a broader audience through events, including its signature annual “Portafest” which celebrates German culture with up to 5,000 attendees, its annual Christmas Party that includes neighboring Sister Cities organizations, its potato pancake and Trivia Night fundraisers, monthly “Stammtische” at local restaurants, and even an exchange open to the public every fourth year.

The impact of the city partnership should not only be understood in breadth, but also in depth. Especially for youth exchange alumni, these experiences are often formative in how Americans view and feel connected to Germany and vice versa. The lasting connections made have resulted in return visits on both sides and influenced major career and life decisions. For example, Emily Eggemeyer has traveled to Germany three times since her 2004 exchange, Jim Hoskens has returned to the US every year since 2011, and Catherine Cummins Bess has returned twice to Germany as a German language teacher with her students to continue the cycle of exchange. In addition to the countless lasting friendships, these exchanges even resulted in a marriage between Waterloo’s Brian Heise and Porta’s Carmen Kardinal.

Deborah Cummins of Sister Cities of Porta Loo attributes the organization’s great impact and success largely to the hard work put in by the local community and both sides of the partnership. “Without the generosity of the families of Waterloo and Porta Westfalica sharing their homes and lives as hosts and guests, without the work of the board of directors of both organizations, without the diligent work of my counterpart and friend in Porta Westfalica, Ernst-Jürgen Mundt, President of Partnerschaftsverein and the Student Exchange Coordinator, and Barbara Homeier, his exchange coordinator successor, this exchange would not be possible—could not exist. But we have dedicated people willing to do the hard work. It is truly the sharing on behalf of these families and the hard work put into this partnership that enables us to continue our very successful program of peaceful cooperation, friendship, and understanding that was the dream of our founders [38] years ago. I hope and pray that we continue to honor their memory with our support of this wonderful program.”

More information about Sister Cities of Porta Loo can be found on the City of Waterloo’s website here.